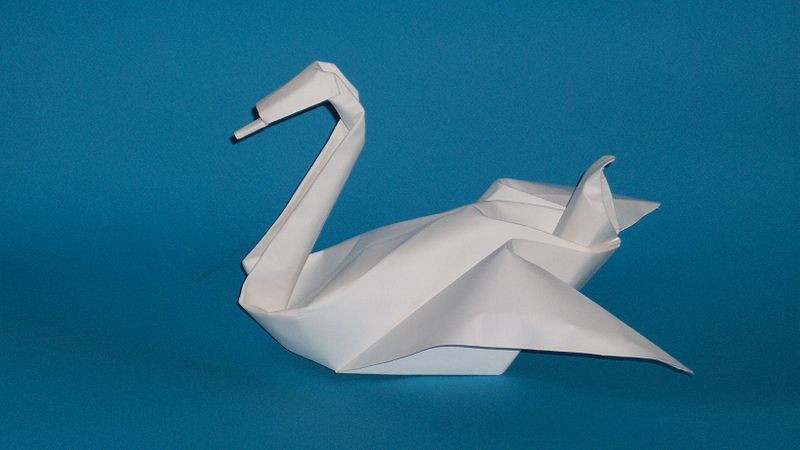 Swan by Akira Yoshizawa, the father of modern origami techniques.

Origami, the art of folding paper into various three-dimensional shapes, has been around for centuries. It started in Japan sometime in the 17th Century, and has developed into a modern art form.  Over the past several years the folding patters have gotten so complex that schematics, called crease patterns, are used as a blueprint for folding.

Recently, one artist — Sarah Morris — has taken some crease patters created by Origami artists — such as Robert J. Lang — and has created her own art from these patterns.  Lang, along with five other artists from Japan, Italy and Spain, have filed a copyright infringement lawsuit against Morris.  Lang claims that the crease patterns are independent works of art protected by the Copyright Act, and thus any derivative works are also protected from copying.  While the Copyright Act does protect derivative works (a work of art which is based upon a prior work), the question here is whether the crease patters are protected by copyright laws in the first place.  If they are, Morris may have infringed on such rights.

The list of categories which are protected by the Copyright Act are provided in 17 USC §102, and includes pictorial and graphic works (§102(a)(5)).  It is important to note that copyright laws do not protect “any idea, procedure [or] process.”  (§102(b)).  So, are the crease patterns merely “procedures” for folding, or are they independent “pictorial or graphic works”?  One way to look at it is to see whether other types of blueprints are protected by copyright.  In fact, they are.  Architectural works are specifically listed as a category of protected work (§102(a)(8)).  However, these architectural works must be drawings or blueprints for the construction of a building.  Whatever the definition of a “building” is, it certainly does not cover folded pieced of paper. 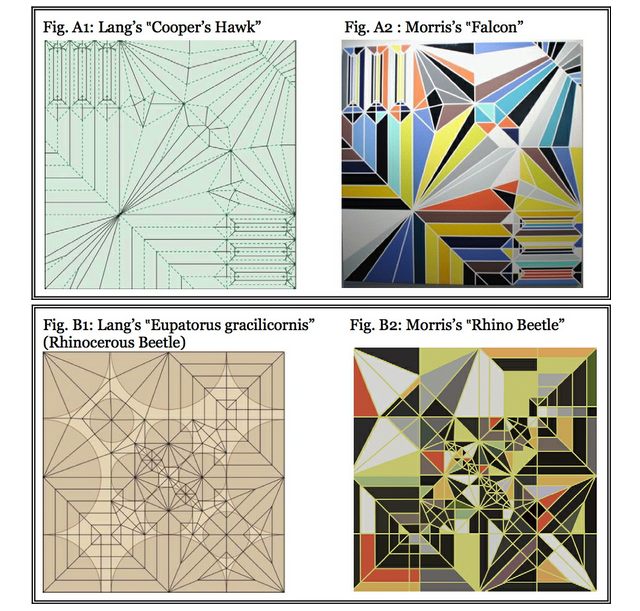 Crease patterns on the left, Morris’s artwork on the right.

Lang and his fellow artists argue that the crease patterns are works of art and that the copyright laws protect these patterns as they do any other work of pictorial or graphic art.  Lang: “Crease patterns have a beauty and interest far beyond their role within origami. I have exhibited and sold my original crease patterns as standalone artworks for nearly a decade in venues ranging from commercial galleries to the Museum of Modern Art.” (Lang’s website.)

It will be interesting to see how this case develops and, if it goes to trial, how the court will rule on the applicability of the copyright laws to these crease patterns.